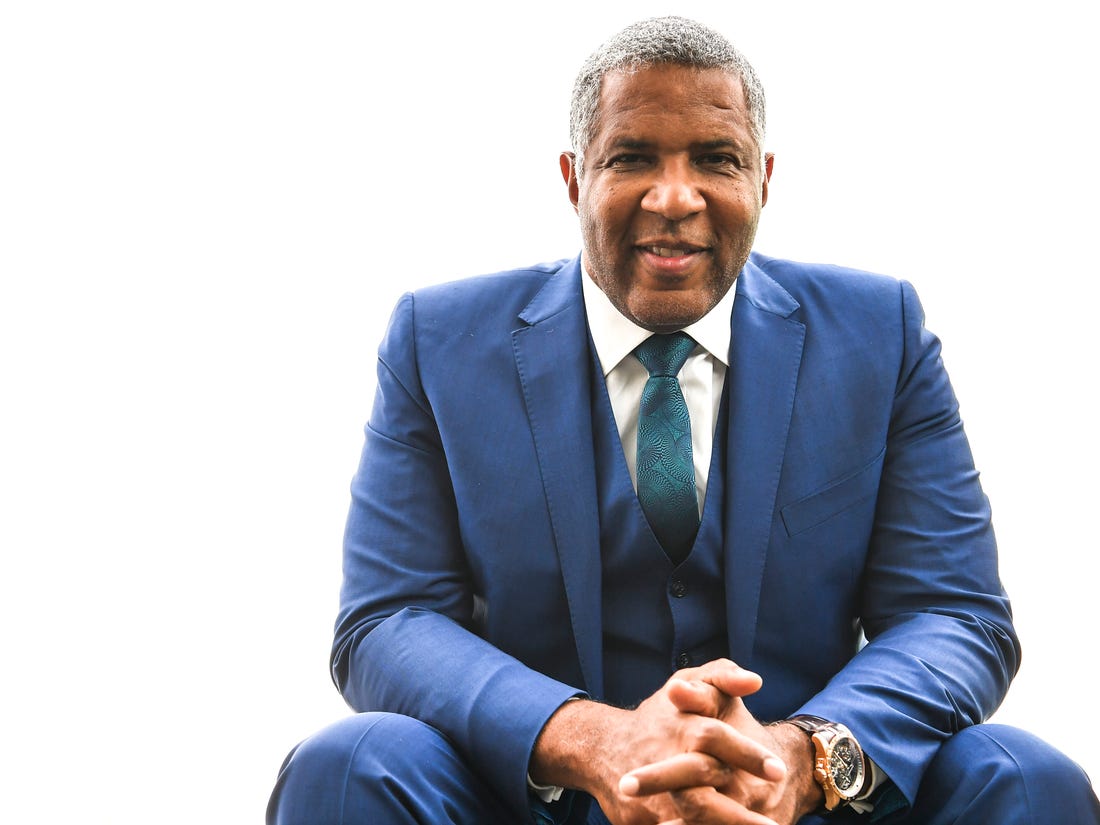 Robert F. Smith is an engineer, businessman and philanthropist who is passionate about helping future generations realize their full potential. Through Smith’s guidance, the Fund II Foundation has grown keystone programs like InternX, as well as many other initiatives. Smith aims to build an ecosystem that allows students and young professionals to develop their skills and work experience in a diverse, equitable and inclusive way.

Smith has said of his own internship at Bell Labs as a high school student that it informed him of the importance of exposure to a working company, as well as the significance of tenacity and following through. Smith’s internship led to a job that lasted him through — and helped pay for — college, and it presented him with opportunities to learn and grow in ways that would not otherwise have been available. It also gave him a lifelong passion for learning and finding solutions to problems.

In addition to InternX, Smith supports career-focused programs at other organizations. The Robert Frederick Smith Internship and Fellowship Program at the National Museum of African American History & Culture funds pathways for individuals interested in studying and preserving African American heritage, artwork and media. Vista Equity Partners, of which Smith is the Chairman and CEO, offers the summer Vista Frontier Fellows program for women, African American, Native American and Latinx who are college juniors.

Smith’s interest in helping young people start their careers on the right foot is not limited to work programs. At his alma mater, Cornell University, he set up the Tech Scholars program to help more women and African American students earn STEM degrees at both the undergraduate and graduate levels. The School of Chemical and Biomolecular Engineering at Cornell was named after him in recognition of this and other contributions to education.

In 2019, Smith stunned the graduating class of Morehouse College with the news that he would pay off the entire class’s student loan debt, along with student debt acquired by their parents on behalf of the graduates. In his commencement address, Smith challenged the recent graduates, along with other alumni and benefactors, to help future classes in a similar way.

Continuing this legacy, Smith called his recent action with the Student Freedom Initiative a means “to redress historic economic and social inequities and to offer a sustainable, scalable platform to invest in the education of future Black leaders.” His donation of $50 million will decrease the at times crippling debt load of students graduating from historically Black colleges and universities.

His history as an advocate and champion of African American education and his efforts to challenge and change corporate culture contributed to his being named one of the TIME100 most influential people in 2020.

Smith’s philanthropic activities are not limited to career and educational programs. Through the Fund II Foundation, he also supports efforts to protect human rights, promote benefits of the outdoors, cultivate music appreciation and education, and preserve the African American culture and history. He also offers leadership to a number of other organizations as a board member for Robert F. Kennedy Human Rights, the Chairman of Carnegie Hall, a Member of the Executive Committee of the Business Roundtable, a member of the Cornell Engineering College Council, and a member of the Board of Overseers of Columbia Business School.

In recognition of his “emphasis on education and support for current and future generations” Smith received the Carnegie Medal of Philanthropy in 2019. Smith has also been recognized with the Congressional Black Caucus Foundation Chair’s Award, the UNCF’s President’s Award, the Ripple of Hope Award from Robert F. Kennedy Human Rights, and the Humanitarian of the Year Award from the Robert Toigo Foundation. Smith was honored to receive the Jackie Robinson Foundation ROBIE Achievement in Industry Award. He received the Morehouse Candle Award in Business and Philanthropy in 2018, and he became Ebony’s inaugural recipient of the John H. Johnson Award in part due to his $34 million gift to eliminate Morehouse graduates’ student debt. In 2017, Smith became the first African American to sign the Giving Pledge, promising to give away half of his net worth earned during his lifetime.

Also in 2017, Forbes’ named Smith one of the 100 Greatest Living Business Minds due to his professional accomplishments and leadership in social justice advocacy. Two years later, he was inducted into the Texas Business Hall of Fame. As the head of Vista, which invests exclusively in data, technology and enterprise software companies, Smith has overseen the firm’s success across a range of investment strategies, including private equity, permanent capital, credit and public equity.

Before Smith founded Vista and moved to Austin, TX, Smith worked in tech mergers and acquisitions at Goldman Sachs in New York City and San Francisco, assisting companies such as Apple, Microsoft, Texas Instruments and HP, among others. He also worked as a chemical engineer at Goodyear Tire and Rubber, as well as Kraft General Foods where he successfully registered two patents each in the United States and Europe for coffee filtration and brewing systems. He holds a B.S. in Chemical Engineering from Cornell and an MBA with honors from Columbia University.